My name is Erin and I’m a San Francisco Scooter Girl. I started riding in 2007 and never turned back. It’s an ingrained way of life now. I ride in the rain, I ride in the wind, I ride on the freeway, or way the heck out in the middle of nowhere on roads as wide as goat trails and about that well paved. I would rather ride than drive pretty much anywhere. 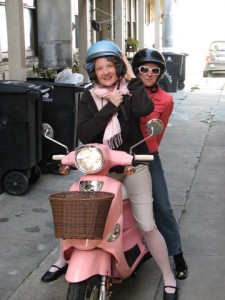 I walked up to my office at 235 Montgomery one spring day back in 2007 and saw a rider on this pink scooter sitting out front picking someone up. I bought my first Buddy the next day. She was a 125 with powder coated rims and exhaust cover, white wall tires, and a wicker basket and I loved her dearly. I would regularly put 300 miles on her in the city on a weekend. I finally started feeling a bit fenced in riding laps around San Francisco so I went back to Mr. Barry Gwin of the San Francisco Scooter Centre and told him I needed to meet other people to ride with. He pointed me at the San Francisco Scooter Girls.

I started attending meetings, going on rides, helping out at events, and finally mustered the courage to ask to join. I managed to make it through my pledge period (which really was not that hard) and received my patch.

I’ve served as a backup to the Membership and Education Officer. I’ve been the Finance Officer, the Marketing Officer, and spent two years as President. These days I think I may be the Secretary and am a backup to our current President, Joanne Quinn. While we still have Officerships with specific duties and responsibilities, we are an easy going group these days with people stepping up to cover whatever needs doing.

I blew the engine on my Buddy 125 at 11,000 miles, and managed to convince Barry to put a 150 engine in it. I acquired some modifications: better forks; shocks; clutch; variator, and a prima pipe to name a few. I had the only pink 150 on the planet, with the same rims, white walls, and basket. 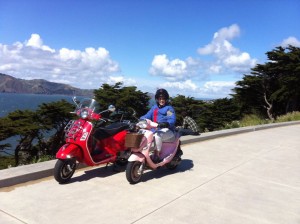 My desire to ride grew beyond what was easily reachable on a 150 and in late 2010 I bought a 300 Vespa GTS Super in Dragon Red as my long haul bike. His name is Red and he is my daily commuter and also what I rode to Canada this past summer. I rode up the coast into Oregon, made a right turn to Portland, then up to Seattle, across the boarder to Vancouver, Canada where I holed up with a SFSG alumni, the lovely Heidi Hartman, for a few days, then on to Revelstoke, up the Ice Road to Jasper, down to Lake Louise and on to Calgary for the 100th Anniversary of the Calgary Stampede and cowboys as far as the eye could see  I then headed home, something like 4005 miles round trip. He’s now got about 33,000 miles on him and I am thinking I might like to ride out to New England this fall to visit the foliage and the apple farms.

The frame got bent on my Buddy in 2012 somewhere around 22,000 miles and I ended up getting a Buddy 170i with all my old panels, upgraded parts, and of course the wicker basket. I have to admit I’m not as enamored of the 170i as I was of the 150, it does not have the same type of power as the 150, so it mostly just sits in the garage and collects dust and cobwebs. 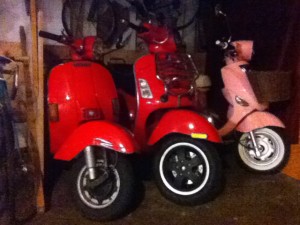 I recently purchased a Red 1979 Vespa P200 from Mr. Gwin, which I named Roman. I thought that learning to ride a Vintage would make me a better rider in that I would need to have a better handle on my corner entry speed on it – I’m working on that and I must say that riding Roman has increased my respect immensely for vintage riders who make it look like cake.

The San Francisco Scooter Girls have been a big part of my two wheeled journey so far. I’ve made a lot of friends both among active and alumni members of my club and been introduced to many other scooter clubs through them. I joined this club to find people to ride with, what I found here was support, mentorship, lots of knowledge and know-how, and some really great friends. It is my hope that the San Francisco Scooter Girls will continue to provide this to women and girls for decades to come.

We are an all girls scooter club based in San Francisco. We started in 2004, and are going strong, 10 years later. We hope to see you at one of our events, rides, or come with us to a rally. Feel free to contact us if you have any questions!